Take it from me – when in Rome, speak as the Romans do; when in Israel, speak Hebrew! Sociologist say that if you do not know the local lingo, you lose out on a whole cultural experience; I would like to add that you are lessened not only in the aforementioned experience but also in the length of your bangs!!
With rudimentary knowledge of hebrew, I ventured out into the big bad world of Beersheva Tonsorial Parlors… aka Barber Shops… After picking one I liked, I entered cautiously.
Here, I must mention that though my hair has been growing on my brainiac head for the last five months, seeing neither hair nor hide of a shears (pun totally wintended, i say wonly), it is not of a length to inspire poems or rapunzel tales. It looks cool though, maybe a little unruly!
Back to Barber Shop… Rating R: R:”Restricted, Under 17 Net Surfer Requires Accompanying Parent Or Adult Guardian.” What follows contain graphic descriptions of of cutting and shearing; wild gesticulating and one syllable language;
B here stands for barber a.k.a. Barber of BeerSheva, Me stands for poor ole ME
B: Shalom!
Me: Shalom! Ma Nishma? *There ended my use of my fluent more-than-one-syllable Hebrew.* Do you speak Anglait?
B: A leetil
Me:I am here for a haircut. The board outside says 30 shekels. Is that right?
B: Yas! 30 shekels. Sit!
Me: (*Thinking to myself – Pidgin anglait will be easier for him to comprehend*) B’seder! I need hair trim. Little hair, I have (Sparks of Yoda-ish, you see?). Not short, trim. B’seder?
B: B’seder. Ken
Me: (*On his taking out his scissors and comb, I begin to picking at random strands of hair and showing how long I wanted the hair length to be- insurance; just making sure*) Trim? See? Trim. Not Cut. Trim
B: ( Perplexed ) No cut? Shave?
Me: (Plucking random hairs out in frustration – I dont need to get my hair cut; a few more minutes will result in a sufficient decrease in hair quantity) Lo! Lo! Cut, yes (Hands describing the Vitruvian Man in the air)
B: Aaaah ! Treem! B’seder.
Me (settling in, thinking – he knows what he needs to do, sit and enjoy the experience): Tov, Todah!
B: India?
Me: Yes
B: India – 3 rupees; here 30 shekels!
Me: (Ah! He’s talking about the price of haircuts) Lo! 30 rupees now. get more costlee
B: No, reeckshaw.. 3 rupees
Me: (*Confused* – Where did the reeckshaw come from?) Ken!
*Sound of scissors clackety clacking, electric razors humming, people shouting at each other outside*
15 minutes later, I wake up from a reverie to find 80% of my hair gone!!! How did THAT happen? I turned to yell in Pidgin English at B but was stopped by the smile he had on his face- akin to DaVinci admiring his most precious work. “Treem”, he said
Aah well, cant argue with that. I directed my shorn head homeward and the first thing my roomates told me was, “You look like you are planning to join the Army”
*sigh*
“I guess, after all, tomorrow is another hair day”
Hum ab nischithta se keh sakte hain ki Hum Baal Baal Nahin Bachey!
Peace out
Reporting from Camp Beraber
BeerSheva

Nope! this is not about the Sith or John Travolta. My ambitions are a lot less loftier.. its about me
“God sent 10 devastating plagues”
Wow! I got lucky.. .he only sent down ague onto me, myself and dents!
The big downside to international travel has always been the availability of at-your-disposal medical care. I am lucky in that my many years in medical school were not entirely wasted, and I can self diagnose and self treat with impunity. I do draw the line with inflicting my medical intelligence on others unless specifically asked for. Rather than talk about the trials of my ague plagued body, I decided to focus on the tribulations of my ague-wracked mind. Why is it that I am at my most negative when I am ill? Why do I dream of fiery hell ending of my various ideas and plans only when my immunity is challenged by viruses whose names no odinary human would want to pronounce, leave alone fraternize with them. For example, take a simple problem like a virus (a virtual one) on my hard drive. I have till-now proven combination of anti-virus with built in firewall and spam blocker(a licensed copy at that too, with updates and all), an external firewall (just in case… its free) and yet another anti-spyware (you never know… its free till July 31st anyway) that ought to keep almost anything short of nuclear bomb away (maybe that too, but I dont want to test that theory anytime soon). But a virus sneaked in, leading me to….. *Tear my few remaining hairs out in frustration* … i ran five different combinations of *free* scan tools and didnt find anything…. *How can so many free tools be so wrong*
but my gut tells me that it is lurking around somewhere waiting to pounce (or is that my paranoia talking?)… but wait, worse to come; in the midst of my fever riddles mind runs a nightmare vision of hard drive format and a reinstallation process … fever does that to me… adds fatalism (in real sense) to my reality!!
I hope to get over this;
find that xxz.tmp file, kill the !@#$%& virus and enjoy a tension-free ague-free existance… till the next episode hits me in the face…

Tazme, more National Geographic, so you can skip this post!
Just came back from a day trip to Tel Aviv! It brought back memories of Mumbai …
January 1998…. the end of my internship… My friend (He-Who-I-Will-Not-Name-for-Reasons-of-Privacy) and I spent a glorious week in the beautiful-in-a-weird-sort-of-way city of Mumbai… aah, the vada pavs we ate, the kms we walked (and cab-bed)… Yes, “Kya aap Prabha Devi chaloge?” did not work; what worked was “Bhidu, Prabha Devi chalo!”… He-Who-I-Will-Not-Name and I were loathe to leave but we needed to head back to our mundane existance!

Tel Aviv yesterday brought back those memories… I walked and walked and walked … all over the place and belive you me, there is no better way to see Tel Aviv.. … the Yitzhak Rabin Square… the Shouk… one of the traders in the market, on learning that I was from “Kashmir”, made me his “neighbour and brother”… too bad he didnt offer any free goodies to his ‘brother”… Dizengoff Street and the numerous brides and grooms heading out ‘into the sunset’ from the wedding gown shops there… and the Beach!!
Aah, the Beach….. If you are headed Tel Aviv way, do not miss the Beach… the sun, the sand, the people… wah!… the day ended at the Deck…
Me thinks Me is going back there at every opportunity! Am now back in Be’er Sheva now, but yesterday lingers on…

If there is one phrase used by tourists that is definitely going to bring out the smiles, its “Yofi Tofi”. It means “Beautiful Toffee”, and is usually used by small kids to express their pleasure. Since this was one of the first few phrases I learnt in Hebrew, it sort of stuck with me. The very fact that my roommates told me that it is not something that people would expect me to say has led me to use it extensively and see smiles light up on everyone’s face. Some tell me that they havent heard it being used for many many years. More reasons that I am all for it; it is a great ice-breaker! 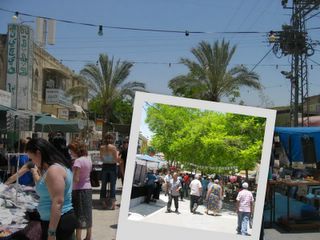 Bustling, but touristy – didnt really enjoy it much! 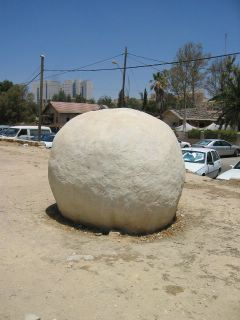 I like this a-one!! Appeals to the stubborn inner child (& outer child!)! 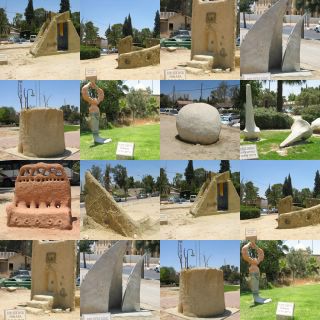 I think I am a “closet nomad”. This particular species of irrationalis hoiminis seeks to plant roots but is incapable of doing so, comfortable flitting from place to place, never settling in one. From the time I left home to “make my mark on this world”(no mention will be made of the craters I left behind by merely using my jogging track!), I have flitted from place to place, moving like a butterfly and stinging no one. From Bangalore, to Mysore, to Delhi to Boston, to BeerSheva, the jouney seems to never have started and dosent look like it will end. I currently reside in Beer Sheva, the largest city in the Negev Desert. I was here for a whirlwind three-day tour in February (Re: I was there too! link on the right) and I then decided this is where I was going to do my summer internship. BeerSheva has a desolate beauty. This city was built by the Ottoman Turks (it existed as an oasis before that, me thinks) as a resting place in their trade route. This is a beautiful city, currently being defaced (as are all cities of the world) by a horde of multi-storey apartment buildings, lies an hour and twenty minutes south of Tel Aviv. But the Old City, preserved in its Turkish-British-Israeli splendor, lives on.
The day I landed, crossing many Seas and one Ocean, my lovely roommates took me to the Student night at the Ben Gurion University. A famous rock band, Mashina, was performing and I gamely agreed to transport my jet lagged body concert-ward. It was amazing-I felt like I was back in the Palace Grounds, rocking to Rock Machine (Indus Creed to the younger generation!)…the excitement, the energy, the enthu – i was jealous that I was too tired to take it all in! If any of you reading this were there, and I stepped on your toes, or poked your face, while swaying various parts of my anatomy to the beat, all I can say is “It wasn’t me, it was the one-armed man”.
I have met a lot of Israeli Jews and a few Israeli Bedouin since getting here. The “conflict” is in the news all the time, and sometimes in the background but to most of these people, there are more important things to do in life- write a research paper, submit homework, research supermarkets to see who has the lowest rate for tomatoes, select a dress for the graduation party… all the things that stress out families all over the world. To the visitor, The conflict seems to be everywhere, brought home by seeing security guards everywhere, the ubiquitous army personnel, the kids with guns, et al. Hey, this is peacetime. But life here goes on…
I will be here till August, when I shift base to London and then on to jolly Beantown a.k.a Bahs-ton!

My first baby steps into a new world! Inspired by Tazme and Vidyas-space, Thank you!
Everytime I write three words, I take two words back!
I will survive.
Expect a decent amount of blogs, but if you ask me “‘What’s the Frequency, Kenneth’?”, I can only reply “I am ‘learning to fly’, and I need you to ‘Ride Across the River’ with me”
Corny.. but baby steps… baby steps…. oops!

I say! no more