If this man in France can survive for as long as he did, then I can breathe easy about my future! hahaha…

Tip: Alex Tabarrok at Marginal Revolution who is “second-hat-tipped” by Winterspeak

Tyler Cower, a practical economist, believes that money to individuals makes more sense than through foreign aid (read government bureaucracy). To back this up claim, Tyler will send one Indian $500 and five others $100 each through Western Union. This is in alignment with the principles he writes about in his new book, Discover Your Inner Economist. Those aforementioned principles are:

1. Cash is often the best form of aid.
2. Give to those who are not expecting it.
3. Don’t require the recipients to do anything costly to get the money.

Why India?
To no surprise, he loves the country! In his words, “been to India twice and both times I have been received with the utmost hospitality and enthusiasm. I loved the food, the music, the diversity, and the more-than-occasional chaos. Most of all I loved how the people engaged me so directly, and how every moment was so full of human drama and stories.”

What do you do?
Find a deserving Indian, and follow instructions on his blog

…yes, and that liquid nitrogen is badass, only watch out for its cool sting!

So, the key to crushing rat brains into a fine powder is to render them stone-like so that a mortar and pestle can be put to good use! What is the best way to instantly render something to stone, apart from Basilisks?
Enter left: Liquid nitrogen

Ta-daa! Liquid Nitrogen
oh yes, at a boiling point of 77 K (-196 °C or -320 °F), you can say that it is a cool dude!
I used a lot of liquid nitrogen over the last few days… enough to power a mini-AC/DC concert. I used cryo-gloves and protective eyeglasses, for most of the time (i looked pretty cool, if I do say so myself). When apportioning the crushed powder into small plastic storage tubes, the cryo-gloves turned out to hamper more than help. So I had to take them off, and depend on my triple-gloved left hand (yes, lessons well learned from the ole days of surgery and urinary iodine analysis) to hold the mortar and pestle while a spatula in my triple-gloved right hand (i support equal rights for both hands – pun unintended!) scooped brain powder into the tubes. Initially, my fresh virginal cutaneous surface (“skin” to you laypeople) endured the cold very well. Aaah, the misinformation and deception that is a cutaneous receptor! It flattered to deceive. By the fourth day, I had blisters on my pinky and ring finger, and rosy spots on my palm where there is evidence of light cryogenic burns. “band-aids wearing” has been added to my morning preparation. 🙂
This morning, i decided that to follow that old adage about prevention, pounds, ounces and cure, and adorned my fingertips (all but one finger, which was left free to be employed in “emergency signage”) with “protection” 😉 hahaha

hence the look below, 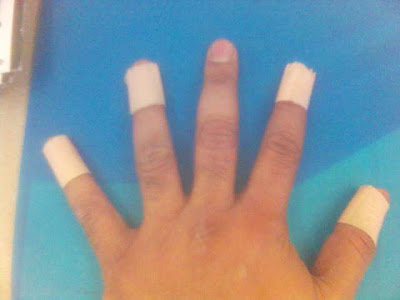 I haven’t photographed the palmar surface with its rosy spots, that might put you off that muffin that you are eating (“Step away from that fatty (or low-fat, if you are that way) snack right now!”) 🙂

Another day, another 30 rat brains ground to a fine powder… at least this has a purpose (i hope!), unlike the fate of their brethren!
On an unrealated note, Monique and Jerry have decided to open their house in Concord, and the pond next to it, for fun n frolicking… “Sun, Swim and Sweets”, they call it…
White Pond 2007 be a sequel to White Pond 2006.
Pat and Lori, we will miss you…

Harry Shearer is a funny guy. Even before he was well known as the voice of Mr. Burns, Waylon Smithers, Ned Flanders, Reverend Timothy Lovejoy, Kent Brockman, Dr. Julius Hibbert, Dr. Marvin Monroe, Lenny Leonard, Principal Seymour Skinner, Otto Mann and Rainier Wolfcastle among others, on the Simpsons show, he was involved in creating , writing and starring in “This is Spinal Tap”, a classic rock mockumentary (one of my favourites). He is also extremely smart. He won last night’s (August 3rd ’07) face-off on Celebrity Jeopardy (yes, yes, I am a nerd, I do pretty well, even though some of the categories are way out of my field) against Soledad O’Brien and Isaac Mizrahi.
Here’s Harry playing a familiar character….

…really? Who would have thought that?
Foreign Policy looks at 5 myths, if you will.
Looks like a 2 plus 2 can sometimes be shown to equal 7. Some economic food for thought.

Thanks to Dr Sood, my mentor in Endocrinology from AIIMS (that’s the much venerated, much hollowed…oops… hallowed “All India Institute of Medical Sciences” in New Delhi, where I whittled away a significant portion of my productive life!), I have been invited to co-author yet another chapter on iodine. Super! After one book (look for No.5 in the National Health Programme Series – yes, yes, I am relegated to a number!), and a couple of chapters in the “Big Book” (which made me famous among the 30 odd people who actually bought the book), I am now embarking on another chapter, this time documenting the endocrine effects of salt iodination. I aim to use high faultin’ words and phrases like plasma inorganic iodine and radioiodine kinetics to show that I can slang with the best of ’em! In my iodine tinted world, I am a fabled warrior, armed with nothing more than my wits and an unending supply of iodine replete salt, which I tend to throw over my left shoulder (uh, or is it my right?).

J K Rowling, you had better watch out… wait… isn’t she finished with writing? Awright, Stephen King, keep an eye on your rearview mirror, ‘coz I am gaining on you!
Teaser trailer: My next book will be set in the land of vitamin B12!

PS: Didja notice the subtle pun in “embarking on another chapter”… nope? no worries – thank you, come again!