London, Leicester, Peak District passed by in a blur… its good to be back in Boston again!

Its Beach time!
Another story from the sands of time. All the Jellyfish died and went to Jellyfish heaven. But the beach was not lacking in strange creatures. Spotted on the rocks was a curiously pigmented, de-finned Merman (“They call him Super Merman”), dressed in the fashion of the beach Bum, luring unsuspecting Mermaids on to the rocks. 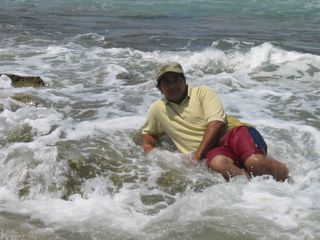 Foam Debris has nothing on this Rock

The Mermaids (truly wonderous creatures of the Ocean, but camera shy) were smart enough to see through his disguise and soon the lonely Merman was seen swimming out to Sea, watched by his canine companion, who later howled a haunting melody in his passing. 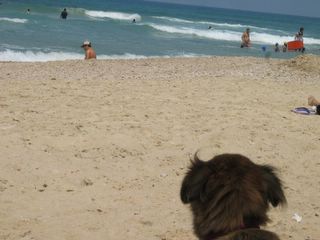 Ah! “The Tel Aviv Minute”
My lovely roommates (M & R) treated me to a concert by Israeli rocker Corinne Allal. Even though she is toying with a half century’s worth of life experiences, she can still rock and roll with the best of them. 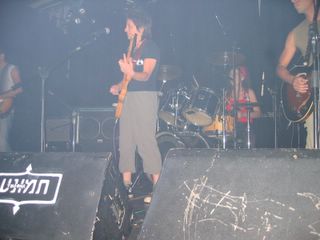 Held at the Tel Aviv club Tmoona, this musical treat started at 11.00 PM! We were right up there next to the stage. Maintaining a surprisingly dignified demeanour, I didnt headbang, stand on the table and jump into the audience, or some of the other things that I am wont to do when in a crazy mode. The show went on till the wee hours of the night and Tel Aviv was still awake when we left! 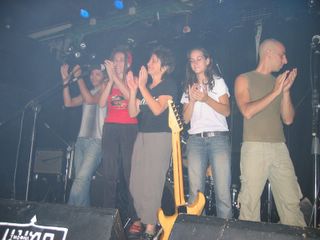 More on Shefayim
This is a quick shot of the lunch snack that is served to the pre-schoolers at Kibbutz Shefayim. There is also bread and meat, but isnt this a fine example of healthy eating? 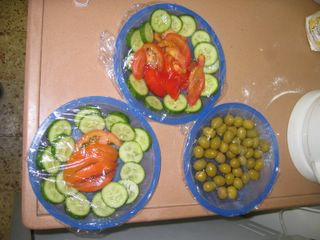 R has a new Dog friend and his name is Pepper, Beatles inspired. Playful and friendly, he is also possessed of the world’s cutest Will-you-pet-me-and-play-with-me look, which is not the look he is giving me… that falls into the category of what-is-the-gizmo-the-big-man-is-pointing-at-me?-Curiouser-and-curiouser look 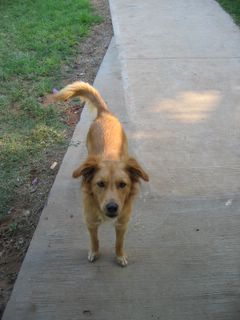 Laqiya, An Oasis in the Desert
My cultural treat never ends in this lovely place. I spent a day in the Bedouin town of Laqiya with my friends K&I and their lovely children, B&Y Laqiya is one of the towns where the Bedouins , traditionally semi-nomadic tribes of the Negev desert, are settling down. Bedouins are lovely hospitable people and my time there was a papmered one!! Among other experiences, this baby camel tried to eat my camera, thinking I was bringing him milk. I have this cute guy on a movie clip but I dont know how to insert that into my Blog, so I guess I’ll podcast it sometime. The sad part of this tale is that the baby is an orphan and dosent mix well with the other camels. 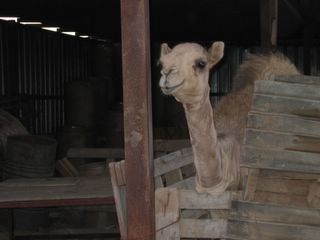 A Quick Query: Where do the Necks end and the bodies begin? 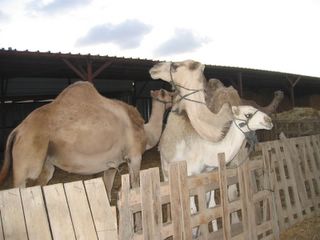 I also ate the “lovely” looking Cactus Fruit. To draw analogy to life in the Negev, to all appearances, the fruit is dangerous, loaded with thorns, and it takes a lot of hard work to peel it. But once the tough shell is gone, the pulp is sweet and juicy, and as welcome to the weary plodder as bread to the hungry 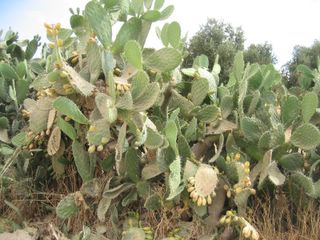 One more week and I head back to Boston

Beauty, they say, lies in the eyes of the beholder.. If those eyes are mine, then Makhtesh Ramon is Paradise! You want the beach, you want the waterfalls, the trees, but dude, there is beauty in starkness too! Making a spectacular entry into my Top 5 places to be, this natural crater rocks (no, no, a meteorite did not hit this place and cause the dinosaurs here to die!; just nature shaking up the bowels of the earth)… it is a natural crater … it’s a wildlife sanctuary, a natural reserve, a national park… and a hikers paradise!
Being an enthusiast of none of the above, (maybe some hiking) but having heard a lot of nice things about this place, I decided to take a peek at the “fire causing all this smoke”.
Being a huge 40 km crater (9 kms across), there has to be a vantage point to this place and Mitzpe Ramon was It!

Our story begins on one nice sunny morning. Our protagonist, who is not an enthusiast of wildlife sanctuaries, natural reserves, or national parks, wakes up late. (Wrong. Error 1)
Instead of taking a guided tour, He, being the adventurer that he is, decides to take the local Egged bus to Mitzpe Ramon (Wrong. Error 2). He is in time to take the 8.15 bus. (Wrong. Error 1 is making him make more errors!). 8.15 is “going to work” time. He finds himself in a bus filled with passengers who are all carrying shooting devices. He is the only one who is carrying a camera, all the others being army cadets going to their posted bases. The bus, thus, makes a detour to every known (and some unknown!!) army bases on the way to Mitzpe. End result, our fine friend reaches Mitzpe some time around 10 AM.
Mitzpe is gorgeous. Located on the crater rim, we can see vista spread out before our eyes, 500 meteres below! …too cool!
Contacting the local agents, at the Visitors Center, he is advised that he might do the 5 hour hike now, rather than later in the day, as it can get pretty hot. “Take plenty of water, at least 5 litres, the heat is dangerous” they tell him. Our hero takes the advice, but takes only 3 litres (“I am from India, this little heat is not going to bother me”, he thinks) (Wrong. Error 3). 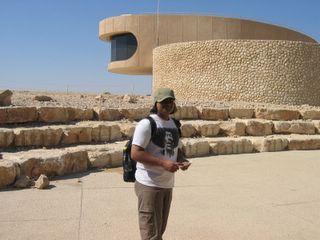 All rigged up and looking set, our friend launches himself off the face of the five hundred feet cliff… (More of the gingerly-feeling-his-way-down-the-steep-slope kind of launching it was..)
“Its a long and lonely road that Frodo was traveling.” Before he entered the dreary fields of Gorgoroth, Frodo looked down into “a formless gloom” where “smokes trailed on the ground and lurked in hollows, and fumes leaked from fissures in the earth.” Makhtesh on the other hand, is beautiful. See for yourself… 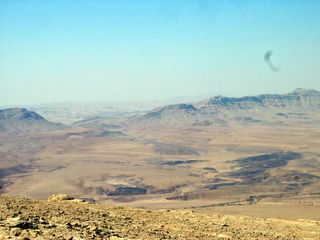 The first task after launching oneself off the cliff was to reach the bottom without losing hair (“When its rare, it becomes more preciousss”) or hide (“Thick skinned I may be, but impervious I am not!). 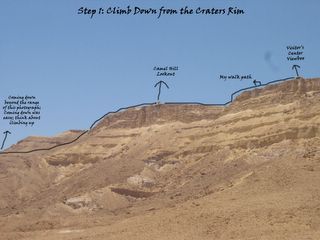 My Safe-Hair-and-Hide journey down the cliff face

A bit pre-emptive and impromptu little celebration for being halfway down the previously many-mentioned cliff face was not a good idea. (Wrong – Error X.. too much energy spent at the beginning itself!) 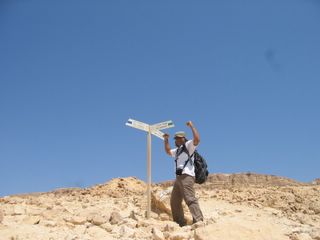 Halfway Down.. this is the beginning

So after a long slide down to the bottom, where was he to go? The destination was the sandstone “Prism” – a mountain of black, red purple, brown and white sandstone. The place was desolate. Most hikers preferred the Spring, fall or Winter season to hike in this pretty place; not so with my Indian friend. He remembered the words of the nice lady at the Visitors Centre – “Follow the trail signs, you wont get lost”. Like an expert tracker, he sought out the white and green and the red, blue and white trail signs painted on the rocks. Lizards, snakes, scorpions, beetles, and rodents, all got out of his was as he plodded unceremoniously towards the basaltic hills that ringed his sandstone destination. 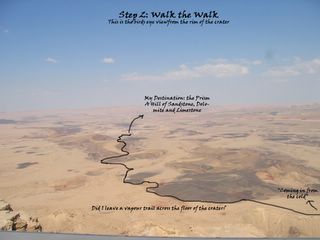 He walked and walked….. 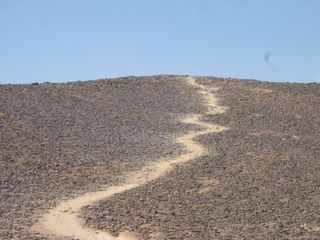 Some parts of his journey resembled the winding paths of the plains of Mordor, but the resemblance ended there. 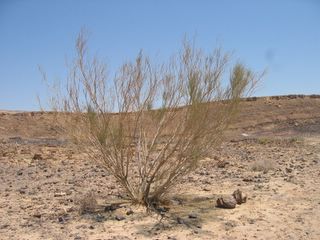 The White Tree of Gondor gave him hope that the end was near. The sun was high in the sky, and then he saw it!

The windings stairs of Mount Prism … 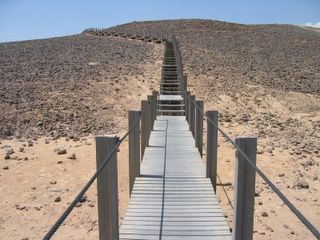 The Winding Stairs dont look so “winding”, but, take my word, they do wind around the mountain

At last, the Mountain had been climbed, the obligatory photographs taken via Timer … 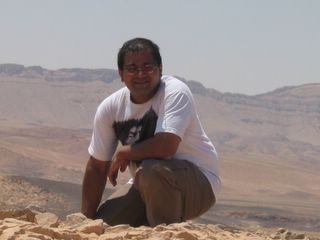 On the Top of the Prism… 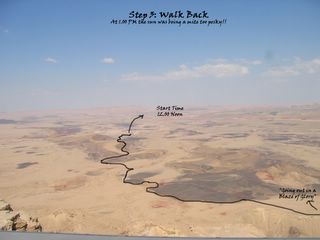 It took longer to walk back… could have been the sun, the acute lack of stamina in the tired body, fear of stepping on Lizards, snakes, scorpions, beetles, and rodents with aforementioned tired foot, presence of sharp stabbing pains in hitherto unknown muscles in leg, back, arms, foot and head, anything could have caused the slowdown… but, steadily, the miles were eaten away, and the base of the cliff was reached.

But disaster, our smart friend decided to drink all his water and thought he could hoof it up the slope before his cells ran out of water (Wrong. Error-too-many-to-count). ( If you are holding your breath, rest assured that Death is absent from the cast of characters!)

One step at a time, he went up the slope. Halfway there, he suddenly remembered that he had brought more than one bottle before he left and put it in the smaller pocket in his bag. Lo behold! It was there, the nectar, the elixir, the water of life. Whats more, his trusty stock of Ibuprofen was also in the same pocket! God Bless Ibuprofen! One tablet and half a bottle of water lighter, the rest of the journey up the face was a cinch! 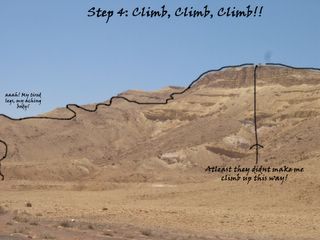 With a tired body, Everest has nothing on Makhtesh!

Back on the top, he ran to the restaurant, bought water, added salt, added sugar and ORS was ready!! Praise ORS! (ORS is Oral Rehydrating Solution)

Moral: All Wrongs combined to make this trip just Right! Look, I even found me a Iron Age house to settle down in! 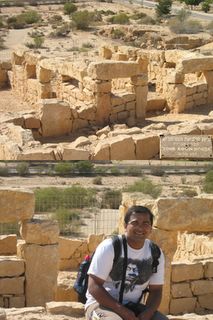 Ramon, Mitzpe, Makhtesh
I will be back!